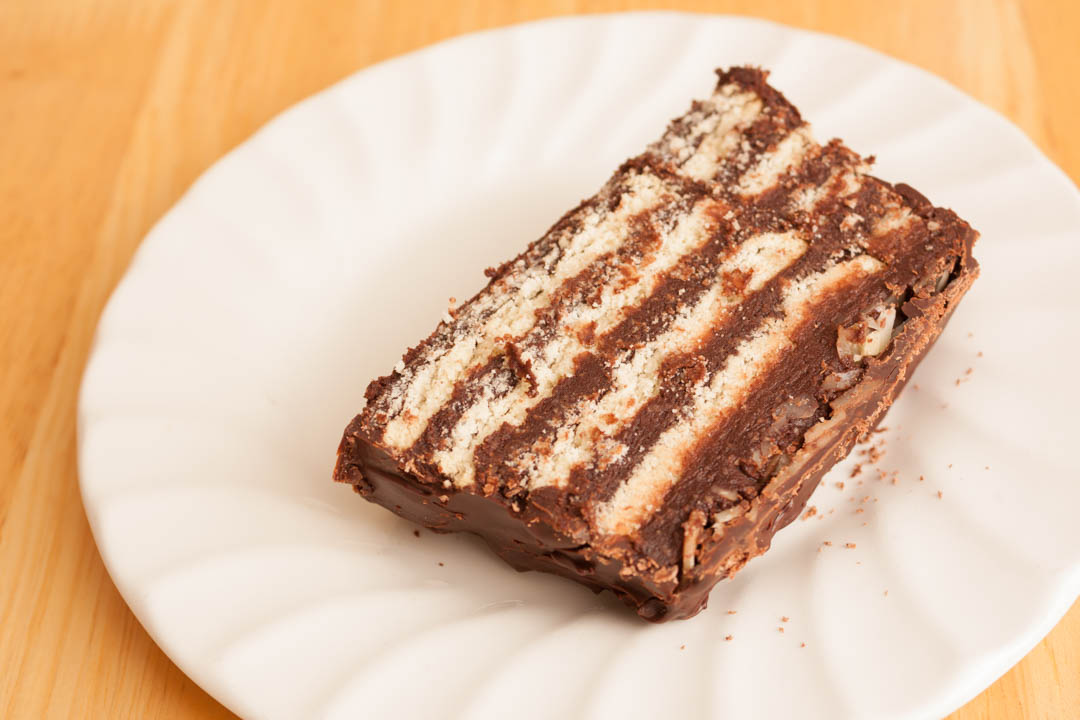 Kalter Hund (meaning Cold dog) is a German cake made from biscuits covered with a thick chocolate cream with a slight coconut flavour. It requires no baking and instead needs to be refrigerated to solidify the chocolate cream.

This recipe is based on a German recipe, which you can find here: Kalter Hund / Schokoladen Keks Kuchen. The original recipe makes a very nice cake, but the coconut oil and butter kek biscuits are quite hard to find (and expensive when you can find them) where I live. So I've slightly modified the recipe to give a similar result with easier to find and cheaper ingredients.

It is thought the cake's name 'Kalter Hund' derives from the fact it is refrigerated and that the tin's shape looks similar to a mining cart (hunt / hund in German).

Line a 1 lb loaf tin with non-stick paper. Ensure that the paper goes up above the sides of the tin as it will be filled right up to the top and you don't want the mixture to overflow.

Spread out the flaked almonds so they are covering the bottom of the tin.

Put the dessicated coconut in a blender and blend for several minutes - we want the coconut pieces as fine as possible.

Sieve the icing sugar and cocoa powder into a bowl, and mix well. Add the very fine dessicated coconut and stir it in.

In a larger bowl beat the egg well. Then add the dry ingredients to the egg and mix. This will create a mixture that is quite dry.

Slowly pour the melted margarine into the mix, stirring all the while. Continue stirring until well mixed, giving a smooth mixture.

On top of the first layer of mixture add a layer of biscuits. You will likely need to cut some of the biscuits into slices to cover the tin from edge to edge.

Then on top of the first biscuit layer add another fifth of the cocoa mixture. Spread the mixture out so that the biscuit layer is covered evenly.

Repeat the process of adding a biscuit layer followed by a mixture layer 3 more times, until you have 4 layers of biscuits, ending with a layer of cocoa mixture on top.

Put the tin in the the fridge and let the mixture set overnight. The next day remove the cake from the fridge, and take it out of the tin. Carefully peel back the paper from the cake, one side at a time. Note that although the mixture is set, it will still be quite soft.

Alternatively, you can put the cake in the freezer to set. This is much quicker to set the cake, and the cake will not be so soft (though it is still a bit soft), making it slightly easier to remove the paper from the cake. If freezing the cake, then after covering with chocolate, you'll need to let it defrost in the fridge before you serve it.

Put the cake back in the fridge for the chocolate to harden.

The cake needs to be stored in the fridge as otherwise the mixture will soften too much (and also because it contains raw egg). 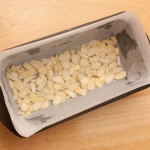 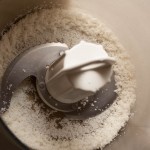 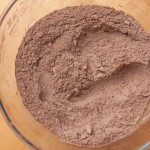 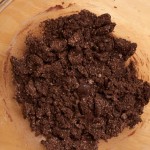 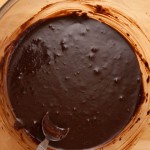 After adding juice and water 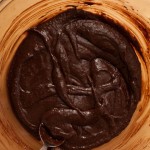 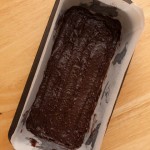 Base layer of chocolate mix 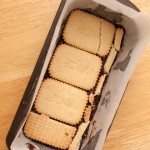 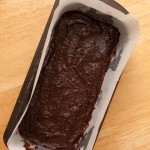 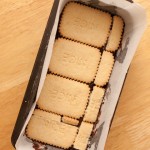 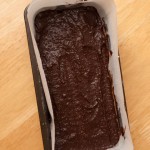 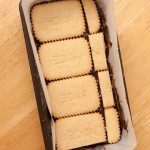 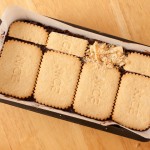 4th and final layer of biscuits 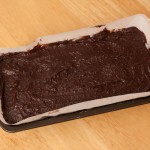 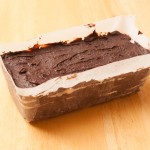 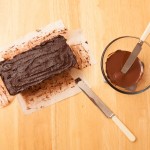 Peeling back the paper 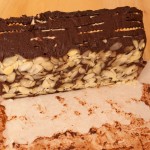 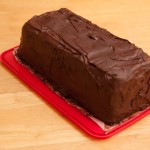 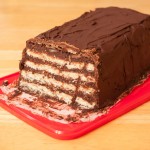 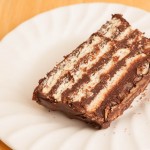