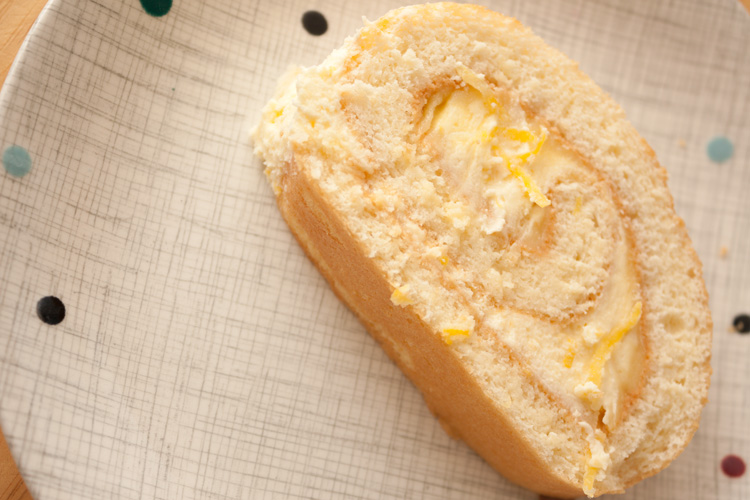 This recipe is based on the Cooking with dog recipe for Matcha roll. This recipe makes a very light sponge that rolls without cracking, which is a often a problem when making swiss rolls.

Whisk together the egg whites in a bowl. When they start to get foamy, add 20 grams of the sugar. Whisk for another 30 seconds or so, then add the other 20 grams of sugar. Continue whisking until the mixture will form stiff(ish) peaks when you pull the whisks out of the mixture.

Next, whisk the egg yolks in a separate bowl. Add the rest of the sugar and whisk until the mixture is smooth and a pale yellow color.

Add the flour to the yolk mix and mix well using a balloon whisk. If you would like the sponge to be flavored, add the flavoring (e.g. vanilla essence) now.

Add one third of the whisked egg whites. Mix this in by picking up the mixture with the whisk, then dropping the mixture into the bowl. It is a good idea to watch the Cooking with dog video to see this technique in action:


Normally when mixing in whisked egg whites I would fold them in, but this technique of dropping the mixture seems to work well.

Add another third of the whisked egg whites to the mixture, and repeat the same technique until that is mixed in.

Pour the mixture out onto the tray you prepared earlier. Spread the mixture evenly to the sides.

Place in the oven for 13 minutes. After 13 minutes, turn the tray round, then cook for a further 12 minutes. This helps the sponge cook evenly.

When the sponge has cooked, remove it from the tray. Place the sponge on a flat surface (with baking parchment still attached), and cover with another tray. This allows the sponge to cool without drying out.

When the sponge has cooled slightly, you can remove the non-stick baking parchment. Cut off the far edge of the cake using a sloping cut. This makes it so that the end will meet up with the rest of the roll better when rolled.

Roll up the sponge on the parchment, and then put to one side to finish cooling. (The sponge will roll more easily when it is still a bit warm - we'll unroll and add the filling later).

While the cake is cooling, make the lemon curd. See Home-made Lemon Curd Cake Recipe for how to do this. Whip up the cream as well.

When the cake has cooled, unroll it again. Spread the cake with lemon curd. After doing this, you probably still have quite a bit of lemon curd left. Add this to the whipped cream, and whip it together to make lemon cream.

Spread the cream on the cake, then roll it up again carefully. This can be quite difficult, and is something I need more practice at myself!

Wrap the non-stick paper round the outside of the swiss roll to help keep it rolled up. I would suggest using some sticky tape to tape the parchment to itself after wrapping round the roll. This will keep the roll reasonably tightly wrapped so that it can't unroll.

Keep the roll in the fridge for storage. After a few hours it should have set enough that it will be unlikely to unroll, so you can remove the non-stick paper. 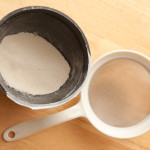 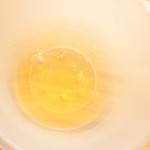 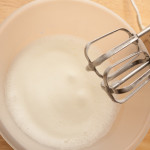 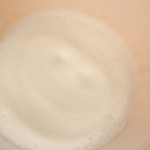 Whisked egg whites after adding part of the sugar 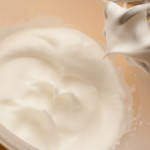 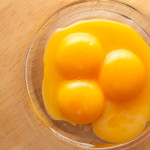 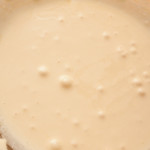 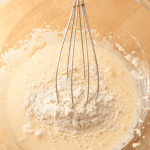 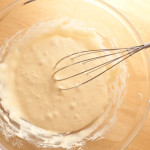 One third of whisked egg whites mixed in 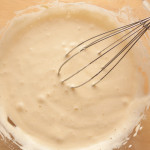 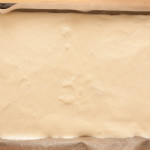 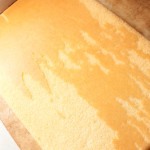 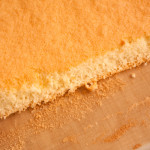 Sloping cut at the far edge 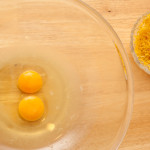 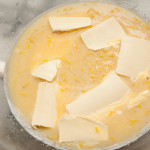 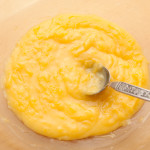 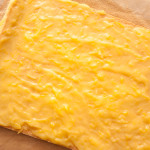 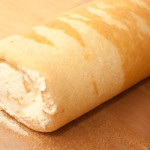 End of swiss roll before slicing 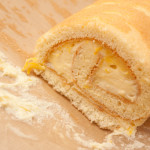 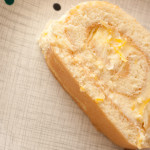